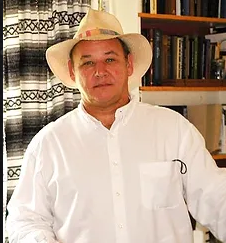 Rick Compton leads the creative life since escaping from the corporate world in 1988. During his fifteen-year career as a freelance magazine writer, Rick wrote features for glossy regional lifestyle magazines and won numerous state-level professional awards.  An article he wrote for the national educational publication Dramatics Magazine on the uses of electronic music in live theatre was selected for inclusion in the Mandarin Knowledge Base. For eight years, Rick was as a regular contributor to publisher CPAmerica’s newsletters. He wrote articles on issues pertinent to not-for-profit corporations. In 1994, he founded Via Colori® Street Painting Festivals which he franchised to fourteen cities around the country. It has raised more than $8 Million for a variety of social causes. He has toured in the United States and Japan as keyboardist for The Platters and has played in pit orchestras and served as music director for dozens of theatrical productions.

Rick lives with his wife Cher of 40+ years on ten-acres inland from Naples, Florida with three horses, two Corgis, and Larry the Peacock. Larry enjoys his own FaceBook page. Rick is a Life Member of The Dramatists Guild.