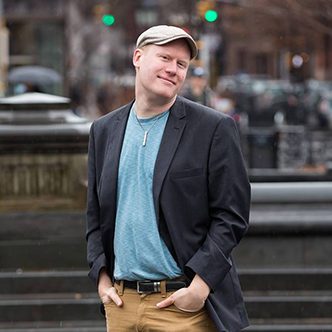 JEFF THOMSON is a recipient of the Jonathan Larson Performing Arts Foundation Award as well as the Dramatist Guild Musical Theatre Writing Fellowship. His music has been performed and/or recorded by artists such as Adam Lambert, Lea Michele, JoJo and Elizabeth Gillies. His song “Summerfling” was recorded on Alexa Green’s debut album SO GOOD (produced by Broadway Records). Jeff’s original musical TRAILS has been performed throughout the globe, winning him the NYMF award for Best Musical Score as well as the prestigious Stage Entertainment Development Award. Other projects include VIRTUALLY ME for TheatreworksUSA, the critically-acclaimed musical horror spoof THANKSKILLING (adapted from the B horror movie), an EDM/club musical adaptation of the cult film JAWBREAKER, an arena rock musical adaptation of Allan Moyle’s PUMP UP THE VOLUME and the postmodern musical comedy THE OLIVER EXPERIMENT. He was commissioned by Broadway Across America to compose the score to the Off-Broadway musical hit MAD LIBS LIVE! and was selected by Amazon Studios to write the music for the animated movie musical MIDNIGHT. Most recently, Jeff was selected by Simon & Schuster to pen the score to a new Broadway musical based on the iconic and beloved sleuth, Nancy Drew.