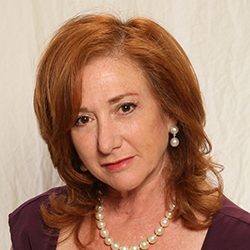 Hope Juber was born and raised in Los Angeles. Her first professional entertainment experience was playing Rachel, a recurring role as Greg Brady’s girlfriend, on The Brady Bunch. After graduating college with a BA in Theater she joined her father, Sherwood Schwartz (famed creator of Gilligan’s Island and The Brady Bunch) as a writer. She quickly became a story editor at Paramount working on situation comedies. During a brief hiatus, she went to New York where she met and subsequently married Laurence Juber. She continued writing, penning episodes for The New Munsters, the animated series Little Shop, and material for Elvira, Mistress of the Dark. Hope soon wanted to combine her comedy writing with Laurence’s rock-and-roll music, and one day while caring for the first of their two babies, she became inspired. She created a comedy rock-and-roll band called The Housewives which played at rock and comedy clubs around LA, as well as many appearances on national TV. Hope then focused on writing musicals, penning four for Storybook Theater of Los Angeles. Two of which, Mother Goose-The Musical and The Princess and The Frog won the Valley Theater League’s ADA (Artistic Director Achievement) Award for Best Original Children’s Musical. With Laurence, she then wrote the score to Gilligan’s Island: The Musical. Hope has produced many of Laurence’s solo album, including the popular LJ Plays The Beatles. She co-wrote the third Brady Bunch movie, The Brady Bunch in The White House and went on to an Emmy nomination for the TV Land special Still Brady After All These Years. Her musical It’s The Housewives! enjoyed a very successful run, as did A Very Brady Musical for which she co-wrote both book and score and which earned her the Best Author ADA award. Hope first got the idea for Without Annette while she was taking an improv workshop from Jeff Doucette.