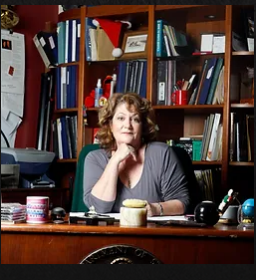 Betsy Bennett has theatre in her veins. At age ten, she was cast in her first show. It so captured her imagination, she began to write and produce shows in her basement. Five years later, after The Junior Theatre in her hometown Battle Creek, Michigan, she took her first professional acting job, in summer stock theatre.  She was 15, and in high school at George School, a Quaker boarding school in Bucks County, PA. It is the same prep school that years earlier had graduated a bright-eyed Stephen Sondheim. At Kellogg Community College, she was immersed in the theatre program and wrote  prose and poetry for Perhaps, the literary magazine there. Betsy left for Albion College’s Theatre Program. There, she won a term in New York City as an intern at Playwrights Horizons under the leadership of Robert Moss and Andre Bishop. After graduation from Albion, Betsy moved to Chicago and became active in that theatre community. She co-founded a short-lived professional company called Arcane Theatriks. Betsy has performed in more than 90-different productions, from regional touring troupes such as The Acting Group to dinner theatre. Some favorites include Abigail and later Elizabeth in The Crucible,  First Witch in Macbeth and Mama Rose in Gypsy for which she received 30 consecutive standing ovations.

​Betsy lives in Naples Florida with her son Jack, where she tries to grow vegetables on her lanai. Betsy is a member of The Dramatists Guild.